No-till, cover cropping and Conservation Ag are not common at all in Denmark and Soren has been at the forefront of Danish CA for a long time.

Denmark has very strict regulations on fertiliser and pesticide use. Up until this year the cap on nitrogen fertiliser applications has been 20% below the economic optimum. The government changed last year and so that cap was raised by 12% this year and will rise by another 8% next year. Soren thinks if the government changes back to the left again they will reverse these changes immediately. Denmark also has its own pesticide approval system which is slower and more onerous than the EU system: hard to believe it could be slower! Also Denmark applies pesticide taxes making some products almost uneconomical .

Soren is involved in a new project with the University of Copenhagen where they will compare plough, min-till and no-till on his farm and two neighbours. They will measure all parameters from economic, soil, biological etc.

When I arrived Soren was building a cover crop seeder from an old mounted sprayer. The idea is to broadcast cover crops into standing crops to allow for more growth. Harvests can be late here this far north and getting a cover crop in after harvest can be challenging. 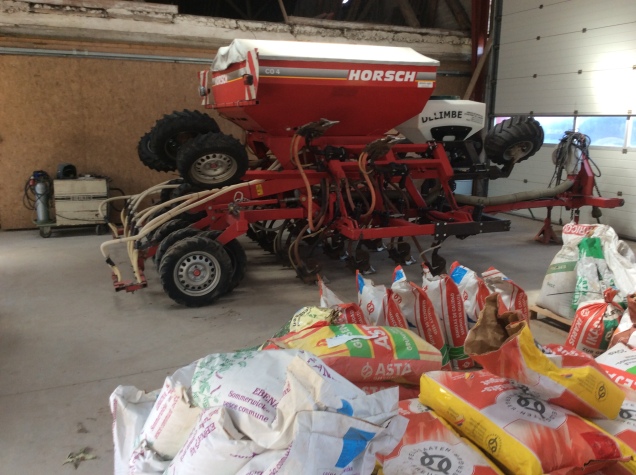 He can apply starter fertiliser with this machine which he believes is extremely important, especially with the Nitrogen restrictions. 80kg/ha/N placed is worth 100kg broadcast. On the back of this machine he can apply slug pellets and he also hopes to add a small seed kit in front of the wheels to apply companion seeds for WOSR

He has trials in this field where he has used different herbicide rates. The only difference was a few cleavers in the no herbicide parts, from what I could see. In the same field he had areas  with no fungicide too. This will be weighed to see if there is a yield difference. The field currently looked very clean. On another field BASF, Bayer and Syngenta have parts of the field they are treating themselves to try to get optimum yield. Soren believes in using lower inputs and accepting an average yield as in most years he makes more money than those chasing yield. I agree with him. It will be interesting to see if the suppliers field areas margin is any better or worse than Soren’s, doubtful.

Soren normally doesn’t grow second year wheat but has this year. He has used RTK and planted the crop inbetween the stubble of last year’s so the wheat was planted into clean soil

Soren’s was in very good nick, very dry too! He has lots of worm holes and around the worm holes it was clear to see chalk. The worms we bringing up chalk from deep and liming his fields for him, for free! 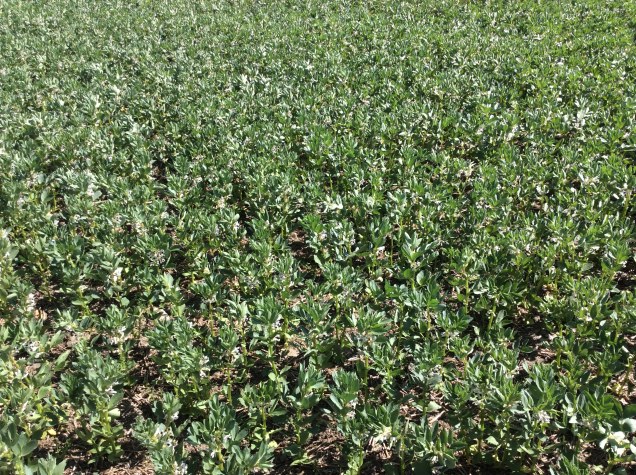 We then looked at his spring beans. Most of the fields had had no herbicide either. There were a few weeds but nothing much. Rats tail Fescue is the black-grass equivalent here but Soren seems to be keeping on top of it through mainly good rotation. 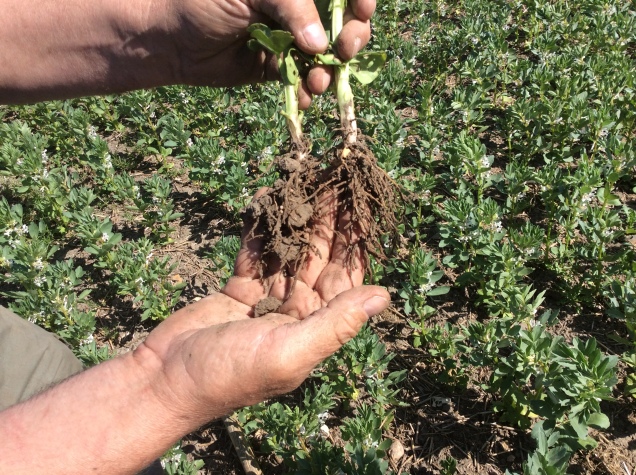 His beans had good roots and nodulation.

The last crop we looked at was his spring barley 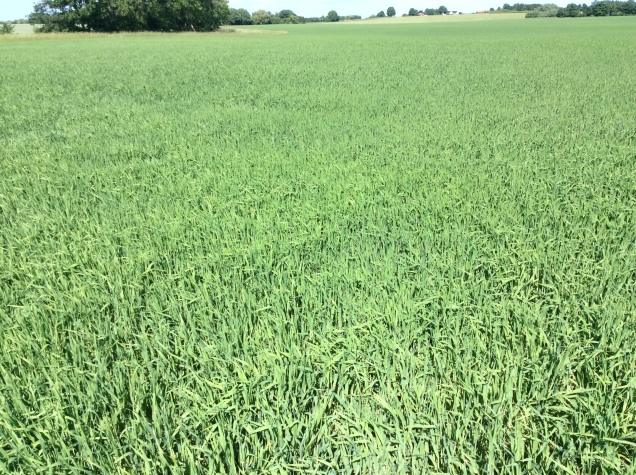 I had an interesting afternoon with Soren. His farm seemed a little like mine at home with different trials everywhere. Thank you for your time Soren.