Before I left Wolfgang in Bern he warned me that Nicolas speaks so fast that even French speakers struggle to understand him. This made me a little nervous as my French is pretty basic and I was going to spend the next 24 hrs speaking and listening only in French! After spending a day with Nicolas I realise it is because his mind is moving so quickly and he has so many ideas and enthusiasm that his mouth is trying to keep up.

So after a 2.5 hr drive to Geneva I got finally to the house of Jonathan Christin, even though Nicolas had given me the wrong address. Luckily my French skills got me there after speaking to a nice man in the village. Jonathan Christin is a Swiss farmer. I found out later in the evening after a few bottles of wine that he was in the infamous bus load of BASE France farmers who arrived at Andy Barr’s farm near me a couple of years ago with Frederic Thomas. He said he recognised me but I had not got close enough in England to pick him out! Nicolas and a group of farmer had spent the day looking at AgriGeneve trials and a few lucky ones came back for dinner.

The morning after arriving we had a quick look at a field of Jonathan. It was winter wheat which he had rolled a cover crop down using the roller below and used no glyphosate

After that we said goodbye to Jonathan and myself and a couple of French farmers (Yann and Vincent) went to meet Nicolas at the first lot of trials which felt like it was in the middle of Geneva – we also got lost. The first set of trials were looking at companion planting of OSR. Below is a field of OSR with beans, Egyptian clover, red clover, vetch, buckwheat and niger 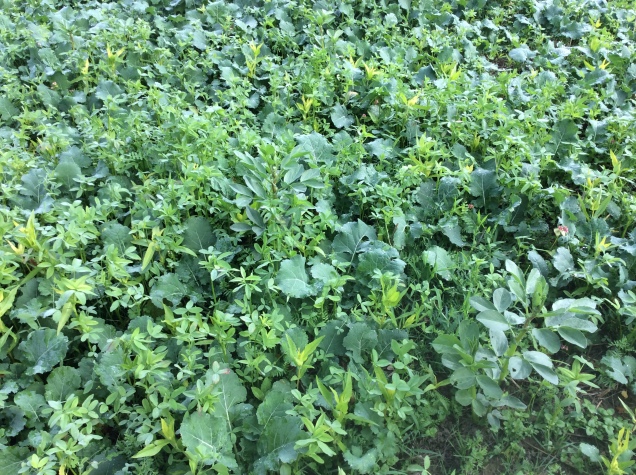 He used glyphosate once and will use Kerb. The winter will kill all except the red and white clover.

After that we again drove through Geneva to another farm of a guy whose name I never got, unfortunately, as he was fascinating. He farms 40 ha, of which the majority is arable, with 2ha of vineyards. He also was a contractor for harvestering wine.

Above is Nicolas on the spade and the farmer is on the left. We were in a field of wheat after spring peas in which he then planted a cover crop of niger. 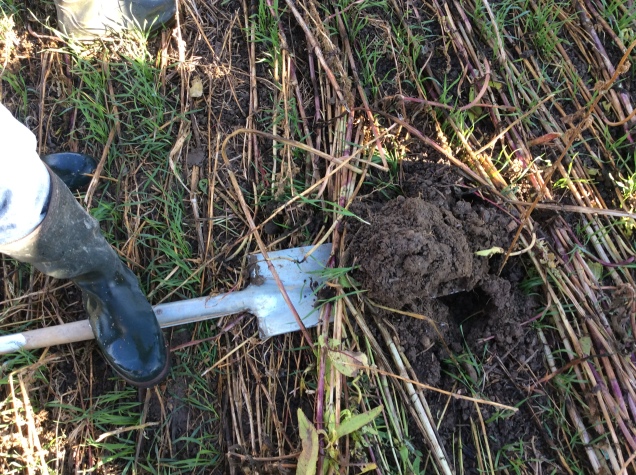 The next field was a field of winter wheat with red clover.

The red clover had been planted with the previous OSR  and had had 2l/ha of glyphosate pre-drilling of the wheat. Last year he did the same and got 1t/ha less of wheat with clover compared to without but he got 2% higher protein with red clover. It seems the timing of the killing of the red clover is important. He did it in the spring, and maybe it was a bit late causing the yield loss. This year all his wheat is with red clover. 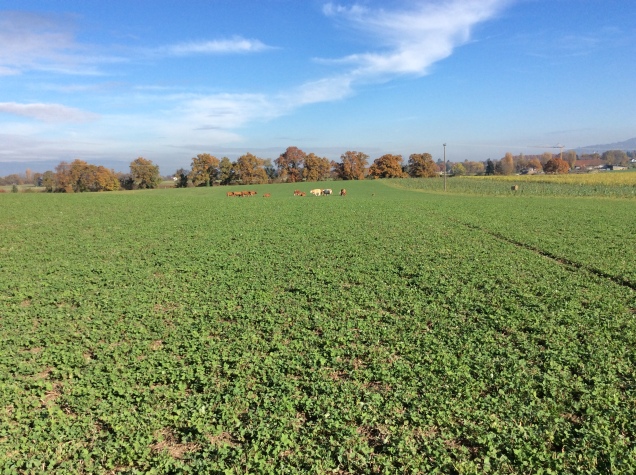 Then the next field was a cover crop after 8t of winter barley. 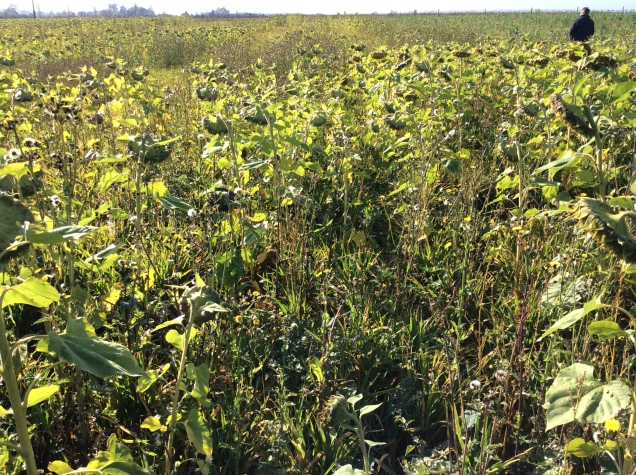 Then we looked at companion plants with OSR

He planted red clover and buckwheat. Companion planted in same furrow as OSR. Red clover can be a strong companion and may need to be chemically ‘calmed down’ .

Then it was barley planted after wheat

The idea in the spring here is to plant soya beans into the standing barley for a double crop using a drill made another another farmer who was there.

The next field they were comparing no till to plough

It was planted with buckwheat, no herbicide, and was to be harvested I think and then followed by maize. They were going to compare costs as well as soil parameters. After looking at his fields we had the compulsory late morning glass of wine. Remember all those different crops were on about 38ha. This guy was a real entrepreneur and was not scared to try anything. As mandatory as the wine is at farm walks in France it is also mandatory to go and look at their drills!

The front tank on this drill is for small seeds or slug pellets. The second for solid fertiliser and then last for seed.

After a packed morning we went for lunch at a restaurant with a view of Mont Blanc. We then said goodbye to the others and Nicolas gave me a personal tour of the trials the other farmers had seen the day before. (Again in French but Nicolas did slow down a little).

Half of this plot had been rolled and half not. The idea of the rolling is that is kills some species in the mix and then allows the winter hardy species to get going so basically allowing two covers from one seeding.

The second plot they rolled the cover to kill it then planted a second cover: 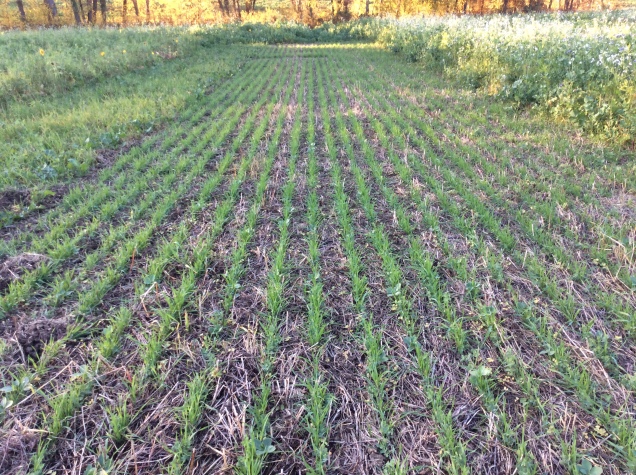 The two cover crops is used on compacted ground to improve structure.

Then we went to his OSR companion trials:

All the companions and OSR had been broadcast before wheat harvest. It had received no herbicide and there was not a problem with volunteers as the mix had got ahead of them. A truly cheap crop!

This next plot is the plot of three harvests from one crop: