Dr Hendrik Smith is someone who I met through Twitter @Healthy_Soils and managed to persuade him to show us around the Pretoria area for two days.

Hendrik works for Grain SA as a Conservation Agriculture facilitator. He is trying to increase the amount of farmers using no till and cover crops to improve soils all over South Africa. Our first meeting was in Brits at the office of Elim Groen, which is a fertiliser company. There we met with Willie Pretorius who is an expert on soil health, cover crops and bio-fertilisers. We started and finished today at Elim Groen talking about their new bio fertilsers

It is a carbon-based fertiliser based on vermicast, biochar and other ingredients. In independent trials they have had great results. Higher yields with 20% less nitrogen.

After Elim Groen’s, Hendrik, Willie, Gordon and I went to the farm of Joseph.

It is a beautiful place, which is in a bowl surrounded by hills. Joseph has cattle, game reserve and about 450ha of irrigated crops. Joseph is an Executive Director of Grain SA and is the vice chair of a local farmer working group.

Joseph is sat down with Hendrik to his right and Willie to his left. In the background you can see bales. He has baled up his residue which he will send to the drought-hit farmers in South Africa for free. South Africa is in a terrible drought. The maize crop is going to be half of normal. This means RSA needs to import 65 million tonnes of maize this year which it just doesn’t have the infrastructure to do. Some interesting times ahead. Joseph on his farm two weeks ago reached 53 degrees Celsius. He gets about 800 mm of annual rainfall similar to home but he has huge evaporation losses due to the heat so needs to irrigate. The irrigation is causing real problems. The water he is using is being contaminated upstream by raw sewage being pumped into the watercourses.  This means the water contains chlorine and E. Coli. The irrigation is also causing sodium problems. 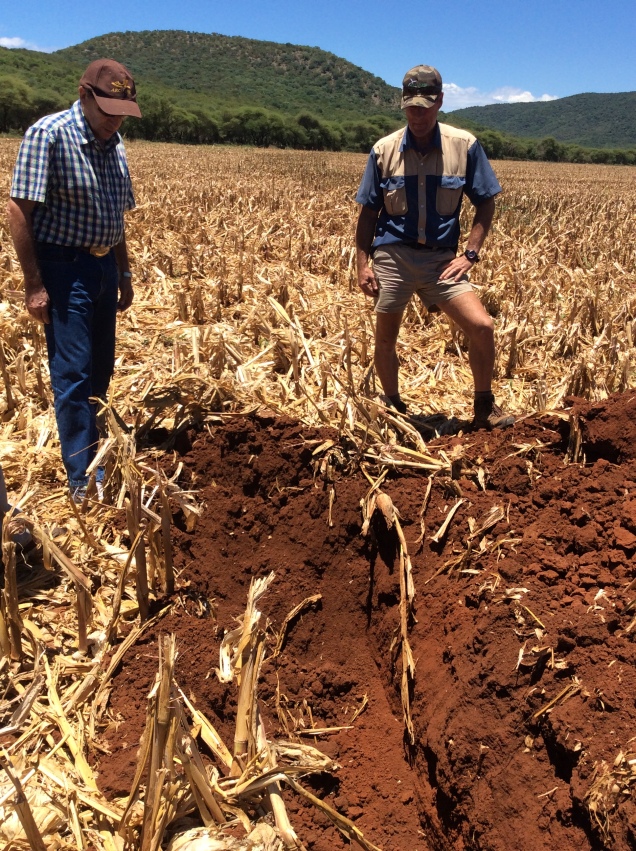 They had dug a couple of holes to see the problems. The first one is capping of the surface due to the sodium and they are also finding an impenetrable layer of salt-like material about 10″ down. This is causing problems with rooting and water penetration. Hendrik and Willie took some soil samples to try to look into the problem

Hendrik wants to take soil health information from lots of farms and publish it. Then it gives farmers something to talk about and compare. Joseph has two different soil types, both heavy clay but both were beautiful fertile soils 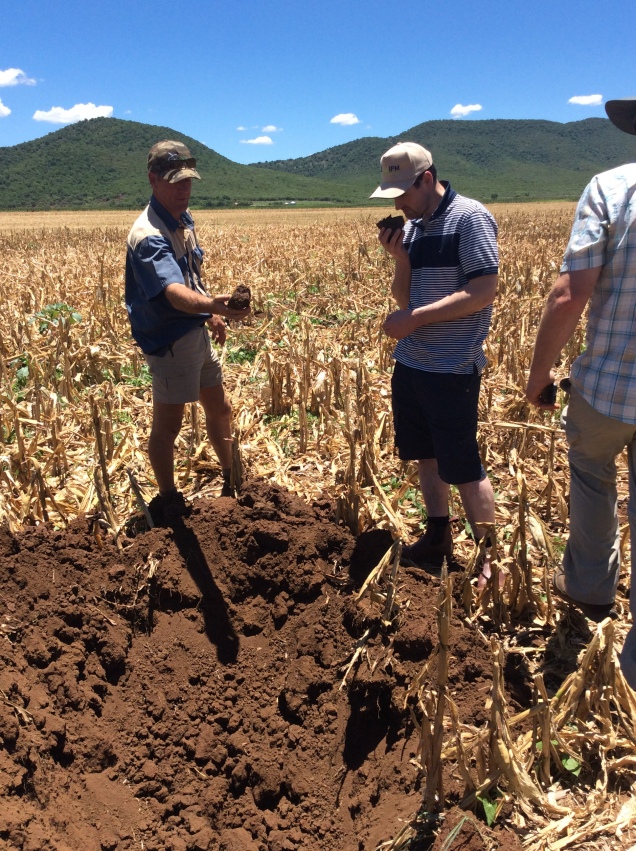 The second one is a lot darker and stays cooler. Gus, the farm manager, is feeding Gordon! They double crop maize and soya beans on this ground. Their biggest pest problem in the crop is baboons 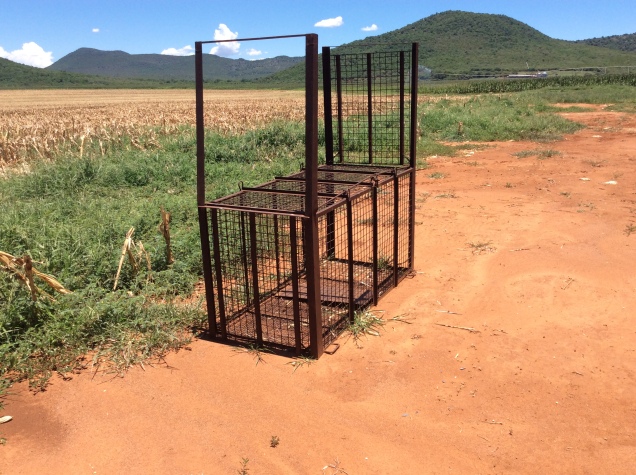 The baboons will come and take the cobs and cause a lot of damage. Other problems are Leopards. They can’t calve in the Veld so they have to bring them in otherwise the Leopards take the calves. Makes our rabbit and fox issues look wimpy!

After we looked around Joseph’s crops we had a Braai with mutton:

It was nice to get out of the heat of the sun and next to the cooler fire!  It was a great visit with Joseph and interesting to see the issues of farming in RSA. Looking forward to day 2 with Hendrik.